Well, I’m you, a gig going person, just like you, a punter. I do a full time job as an Engineer in the Graphic Arts Industry as a Digital Printer Engineer and The UK Trainer for NEXPRESS and NEXFINITY for Kodak.

When I get home, I do this, the Melton Gig Guide website and I used to do The Melton Times Gig Guide to (for Over 6 Years). 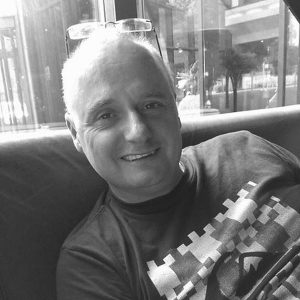 As a Musician, I have played in My Own Band RiffTrade and 20 gigs up and down Englandshire in ‘Planet Abba’ (that was about 15 years ago). Planet Abba incidentally was the first ever band to play The Cutting Room (for my 40th Birthday). I have also played Guitar in the house Band backstage in the Theatre for Christchurch Theatre  Club at Loughborough Town Hall Theatre for “Jesus Christ Superstar”, “Summer Holiday” and “Fame as well as playing Guitar in “Fame” at Melton Theatre. My most interesting challenge to date was Playing Dave Bukatinsky (The Security Guard) in the Full Monty. Here I was singing and acting in TMMTC’s production of “The Full Monty”. And Yes! We did! We dod do the Full Monty!

My next project is “Project Pete” (Named after the folder Jason stored the song files). Very soon Jason Sargent and myself will hit the streets as “Project Pete’.

Why do you do the Gig Guide?

As above, I’m a punter like you, I love live music, and most of all I love live music choice! There are at least three if not more venues with live music in town and The Borough, if not more, each and every Weekend. So, Can  I ask you? To have a look at all the others, It makes for a great night when you do! Who doesn’t love a Pub-Crawl? A live Music Pub Crawl is much Beterer!! Remember use it or loose it! The Pubs pay for the Bands to play, if they don’t make enough money to pay for this then THE VENUE LOSSES THEIR OWN MONEY! Live Music will stop. Simples!

How did the Gig Guide Start?

Way back in 2012, I used to buy the Melton Times to look at the Gig List (or take a sneaky look at the The Melton Times in WH-Smiths)  because before I started, that’s what it was! Just a list and the start times and band names. Not very useful really, What’s Indio Black? Analogue Haze?

I suggested the Idea to the Melton Times around late Feb 2012 of doing a gig guide possibly a review of last weeks offerings. I was asked to write a test piece by (the then Editor) Michael Cooke. I wrote about Grigglefish’s last Gig. The Gig Guide nearly ended right there, There was “No room at the Inn” and only on my second attempt did I manage to get in. 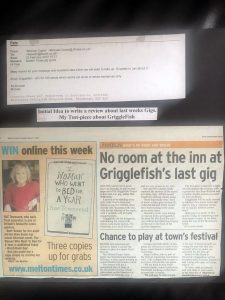 At this point my only backer then was Generous Briton Landlord,  Mick Rathbone.  It took a while! but I finally persuaded Janet Ling (Landlady for 25 years)  of the Noels to trust me with her upcoming artists lists and the Gig Guide was on its way.

The Melton Times liked the Idea and advertised for ‘Bands on the Circuit’ to send in pictures and details of upcoming Gigs” The silence was deafening! (little known fact! Most bands who play in Melton do not live or come from Melton).

Wind on into August 2012 when I started collating the information from the venues about who’s playing where and sending it into The Melton Times who had FINAL EDIT. This is how the Melton Times Gig Guide began. Because the folks writing and publishing the Melton Gig Guide had no knowledge of The Bands or The Venues, it was fraught with mistakes! They had the power to turn a play on words of Martha and The Muffins ‘Echo Beach’ into ‘just some words’ thus losing the music reference!

The Last major change to The Melton  Times Gig Guide was the introduction of new Templates in the October of 2013 by Johnston Press publishers of The Melton Times. The Gig Guide was running at some 600 words wordage and would often have 2 pictures and a preamble by myself previously. 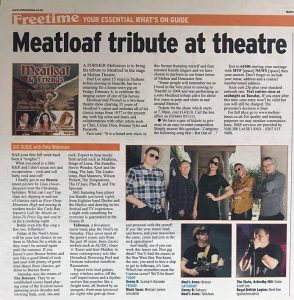 With the introduction of templates, The Gig Guide was cut to about 300 words no Photos. This is because most towns don’t have a Gig Guide in The Local Paper, we didn’t fit the norm!

It was here, when the Disastrous “XMA Game of two Halves” indecent happened! A really excellent football inspired write-up about changing the old drummer to a new drummer Write up was was cut to “XMA will be performing at The Noels Arms”

The full content was “Its definitely a game of two halves this Saturday night as Punk Rockers ‘XMA’ play the Noels Arms. The first set features former members Brian and James ,while the second will see youngest member Joe take to the drum-stool for his first full set .One thing guaranteed not to change will be the top quality Punk Rock delivered straight from the heart.” Much better isn’t it? You can imagine that there was not unreasonably, a bit of a palaver. See for yourself below the drop in “Wordage in the Photo Below. 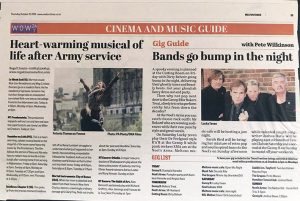 This was the Catalyst to create a website, so that no music banter was wasted, no Waysted music puns! (See what I did there? 😉  )UFO Spin off Band) ).

The Melton Gig Guide Website www.meltongigguide.co.uk was created within a few hours on the Saturday Morning of the 2nd November 2013. Post Marmite on Toast and Coffee, Obviously!

The last major change was when my website broke in August 2016 and I had to move from the then current provider 123 Reg.

Its a shame! With 39,110 hits under its belt, it just couldn’t be edited by me only by .123 reg (Which is a blow for a weekly music listings blog/magazine. My my old bands website was temporarily Hijacked www.rifftrade.co.uk and had a further 713 hits there over 3 weeks whilst we got all this sorted out.

I had to move. Thanks to the fantastic help from ‘Dave The Rock Band’, and ‘Cocked n’ Loaded’ Singer  Matt Chubb , he hosts Melton Gig Guide on his own Servers at Matt Chubb Hosting.

Now 6 years in and Melton Gig Guide has had well 100,000 hits and reaches an audience of 24,000 hits from nearly 12,000 visitors from all over the world each and every year, still hitting regularly  over 2000 Views each and every month.

Thank you for being part of this journey 🙂 x

Remember If You Cant Find It #GigGuideIt  a phrase used by two generations at The Broclehursts when they want to know whats on at the Weekend. Thank you Hayley x

We have tried to improve content on the website as we go forward, so when Facebook Live was invented (around 2017), Melton Gig Guide was pretty quick to adopt it and upload live Videos from the pubs in town. The downfall and very real problem of Facebook live is the quality of the 3G/4G connection. It often happened where a recording starts in  HD and reduces to a milky pixelated video with reduced quality sound. This is why Melton Gig Guide no longer does this. Instead, videos are fully loaded to my device, then uploaded to Facebook in full HD.

If you type #gigguideit  Then Select the Videos Tab you will see over 200 Videos that I have shot at various venues in the Borough of Melton Mowbray.

Whats Next? It was pointed out to me that when I share my Facebook Videos on this website, you have to have a Facebook account to view them. With this in mind and with a grant from Ragdale Hall (for Equipment), Melton Gig Guide launched our YouTube Video Channel “Melton Gig Guide TV” on the 10th of November 2019. The first video featured XMA and can be viewed HERE:

This Channel will feature New content in Full HD as well as historic content in HD (720p) this will give us higher definition videos and higher quality sound too.

Thanks to The Melton Times and Ragdale Hall ‘Make It Happen’ Grant of £250 Melton Gig Guide has been able to invest in additional tools to make more professional looking videos for Melton Gig Guide TV on You Tube. I’ve just got to teach myself Adobe Premier.

The Melton times Gig Guide and my website www.meltongigguide.co.uk takes around 10+ hours of my time each and every week. Incidentally. The Melton Gig Guide has been delivered from months long training courses in Belgium, Italy, Switzerland and Germany with work and at RCF The PA Company in Italy, as well as from frequent walking holidays.

The whole venture is done on a week by week basis.

Yes! The Melton Gig Guide is free to advertise your music related event, wether you be a Band, a Pub Quiz (With a music Quiz), a play, a Theatre or any other type of venue.

The Gig Guide does incur costs which where paid by myself Pete Wilkinson up to this year (2019).  Melton Bid kindly offered to Sponsor the costs for Melton Gig Guide, so for this year my costs have been covered. Many Many Thanks Melton Bid , it really means a lot to be recognised for the work I do.

We Have two Websites www.meltongigguide.co.uk and www.meltongigguide.uk they are hosted by two separate companies because “Denial of Service” attacks are very real.  Our .UK website has been used 3 times since its inception when .co.uk had a problem and it worked seamlessly without any noticeable drop in audience and without the users being aware that we had switched them. .CO.UK is hosted for free by Musician Matt Chubb, going forward I would like to pay him. .UK is hosted by GoDaddy.

When Melton Gig Guide Started it was on a free single page website on 123reg.co.uk but it broke! see how it looked here, www.rifftrade.co.uk hosted Melton Gig Guide for Three weeks when 123reg broke. When we migrated to WordPress thats when it started to cost money. We have tried advertising on our pages, and have applied for funding but no success until mid 2019 whenMelton Bid thankfully sponsored Melton Gig Guide’s cost.

In order to do this without resorting to using my work laptop I have had to buy a small laptop, something small enough to fit in my walking day bag, or my laptop bag if working away.

Microsoft Word £106 one off payment

From time to time when working away hotel WIFI although is advertised its often useless, so I have to use my mobile phone data. Also uploading Live Videos eats data, so events like the Amazing Melton Folk Festival usually mean I’ll use up my data

EE extra Data £7 as and when my data is exceeded

Kelly Spencer, for her years of service helping check this content, (You cant proof read your own work!)

Arabella Coombes Helping Admin the Melton Gig Guide Facebook Group and for Posting Events from around the Villages, and Live Streaming when I cannot.

Matt Chubb for stepping up and assisting my transition into a WordPress site, its much much much better than what I had previously. His own servers are hosting Melton Gig Guide.

Paul ‘Manny’ Manson for his continued support and for the the use of his excellent Rocktography (If you’ve not seen these you should!)

And I would like to thank the 12000 visitors a Year for reading. please share The Melton Gig Guide spread the word keep Melton Rockin’

or just fill in the form below: